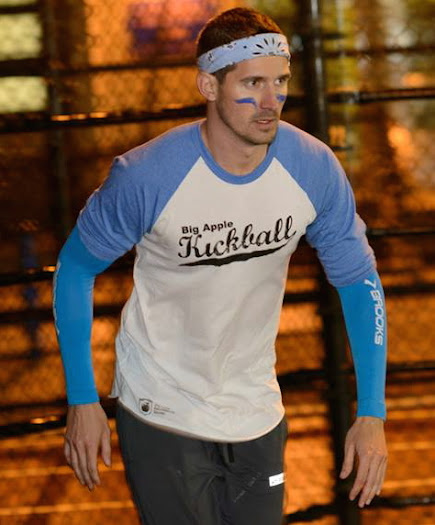 Meet Justin, our newest Kickballer of the Week! Justin, a vet on Navy, is no stranger to the sport. Find out what gets him going in the morning and his vote for song of summer '14!

You have some kickball skills, but what do you like to do when you're not on the field?

I also play dodgeball and ran track in college. Other than that I love traveling, eating good food, music, TV, and movies. All normal things I suppose.

What do you do professionally?

I'm a sales rep for an athletic brand called Brooks. We focus on running footwear and apparel.

What's your vote for song of summer '14?

Nothing has jumped out at me so far and its already July! I love Sam Smith's album but that doesn't really have any qualifying songs of the summer. As long as it doesn't turn out to be 'Wiggle', I'm happy.

The best part of waking up is?

A bacon, egg and cheese on a bagel.

If you could be any other person for a day, who would it be and why?

Kickball director Michael Fabiani. I can't imagine what it must be like to have so much power and respect.

If you had to choose, would you say you're a Carrie, Charlotte, Miranda, or Samantha?

While I'd like to say I'm none, I guess if I had to pick one, I'd say Charlotte.

*This image is from Spring '14. Justin is currently on Navy.